A Trio of Mismatched Camels

A post concerning camels and trade, straying somewhat off my usual track, but there is a mention of silk!

A stone relief carving by a leading sculptor in 19th century Britain shows three camels—and the bones of a fourth—laden with goods being led by a man dressed in Bedouin robes. It sits above the doorway to Peek House, built in 1884 as the offices for the thriving company of Peek Brothers, importers of tea and other goods. The frieze has been noted in several books and recent blog posts but few have mentioned a striking feature.1 Although it is probably intended to reference the crest of the Grocers’ Company which shows a dromedary representing goods brought from afar (see below), the central camel in the frieze is clearly a Bactrian, a two-humped camel from central Asia. How do we explain this anatopistic beast?

Display of Arms of the Grocers’ Company with a crest of a bridled camel laden with bags of pepper.

Sir William Henry Peek (1825–1898) commissioned this work to adorn his company headquarters, built in 1884 at 20 Eastcheap, London after the previous building had been demolished to allow for the construction of the Metropolitan tube line. He employed Alexander Marshall Peebles (1840-1891) as the architect.2 Peebles had been elected a Fellow of the Royal Institute of British Architects (FRIBA) in 1879 and was responsible for several buildings in the City of London. He became Architect to the Corporation of City of London in 1887.

The commission for the frieze was given to the sculptor, William Theed (1804–91).3 Theed was famous, not only for his royal portraits, but for the allegorical statue of Africa at the Albert Memorial (1865–69). That statue, of course, has at its heart a queen of Egypt on a camel—a dromedary.4

I have not been able to locate archives from the period of the commission, but it is perhaps not too farfetched to hypothesize that the proven portrayal of a camel was one of the reasons Theed was selected for the Peek commission. His high status probably also played a part: Peek Bros was a leading city company.

The company had been founded in 1810 by William Peek, joined a few years later by his brothers Richard and James, becoming Peek Brothers & Co., and established at 20 Eastcheap around 1842.5 In 1865 the company paid duty on over 5 million pounds of tea. Two other companies were meanwhile formed by members of the Peek and Winch families and these merged by the end of the century and became incorporated as a limited company in 1895 as Peek Bros and Winch: ‘the largest wholesale dealer of tea and coffee in the world.’ Sir Henry Peek was the eldest son of James.

Meanwhile, James Peek had established another company for two other sons with George Hender Frean, the husband of his niece, to produce biscuits and cakes. This was Peek Frean & Co. Ltd, later producers of the custard cream and bourbon.6 (Incidentally, in 1866 James Peek sold his interest in the company to his son-in-law, Thomas Stone, a silk manufacturer.)

J. Holden MacMullen, writing in 1912, reports that Sir Henry Peek claimed that he was responsible for the idea behind the design and also noted how many people had praised the accuracy of the camels’ depiction.7 This is perhaps not so surprising: there were plenty of models by this time. For example, in 1865 Elijah Walton (1832–1880) had published a book on the anatomy of the camel providing detailed images.8 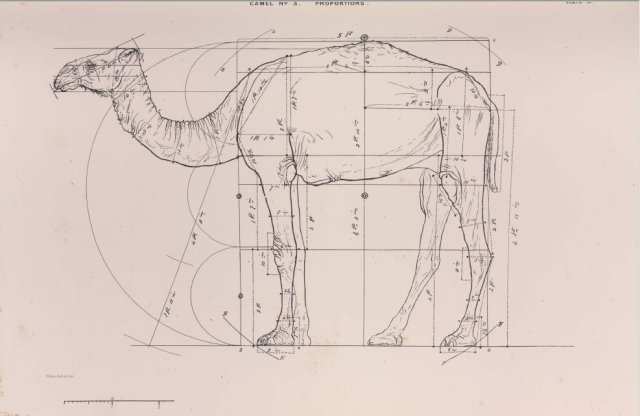 Drawing by Elijah Walton showing the proportions of a dromedary.

Walton’s images are primarily of the dromedary and taken from first-hand experience: he spent time in Egypt, Turkey and Syria. But there were also camels at London Zoo, both dromedaries and a female Bactrian. Walton includes the proportions of the latter in his book, giving her height as 7 foot 5 inches to the top of her humps, whereas his dromedaries are measured between 6 and 7 feet. In fact, the Bactrian is usually the shorter of the two but this might explain why, in the frieze, the Bactrian is shown as slightly taller. Theed would have access both to the book and, if he cared to visit, to the camels themselves at the zoo. He could also draw on the experience and work of other contemporaries, such as the painter Frederick Goodall (1822–1904), who also had visited Egypt and often featured camels in his paintings.9

McMullen states that the design was used as the company bill-head before this (repeated by ‘The Wandering Wombat’ author, see note 1), but has this has not been possible yet to verify nor, if so, is it clear who made the original drawing. The billhead below showing the camel design dates from 1921. I have been unable to find an example earlier than 1919 but hope to visit the Metropolitan Archives before too long to check this. Peek Bros. were importers of tea, coffee and spices, and MacMullen and others have suggested that the three camels are each carrying one of these. This seems plausible although no primary source is given nor have I been able to find one. 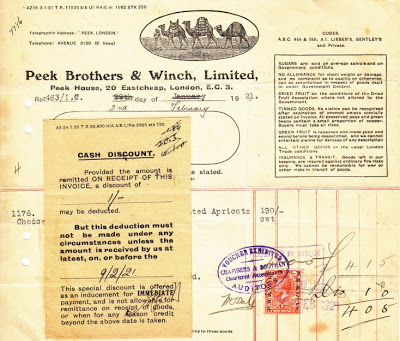 The presence of the Bactrian remains unsolved. Did Sir Henry ask for it to be included to show that his business empire extended beyond the dromedaries range from the Arabian to Rajasthan deserts. And, if so, what is the Bactrian carrying? Did Peek Bros. have business interests in central Asia? Or is this reading too much into what might have just been a whim of Sir Henry or the artist? I would welcome any further information on this, especially on any known archives, and will post updates.

4. Although the original design had a lion. It was replaced because of its associations with Britain. See G. A. Bremner, ‘Between Civilisation and Barbarity: Conflicting Perceptions of the Non‐European World in William Theed’s Africa, 1864–69’, Sculpture Journal 13 (2007), 94–102.