Early Exhibitions of the Collections of Aurel Stein: Part 2: 1911: The Festival of Empire 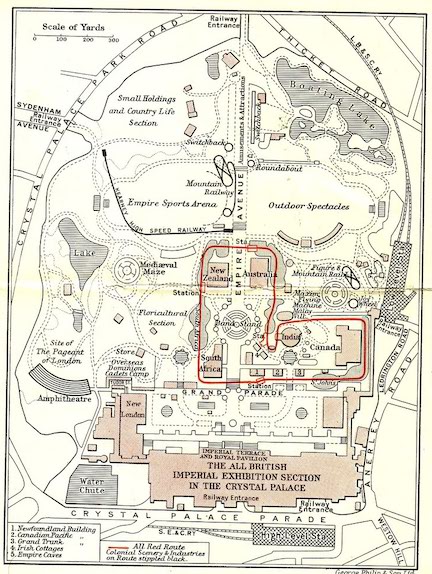 Map of the Festival of Empire site.
The Indian Pavilion is to the right of the bandstand in the centre.

The Festival of Empire opened at the Crystal Palace in north London on 12 May 1911 to celebrate the coronation of George V (r. 1910–1936). The Indian pavilion was one among the many exhibition spaces built to celebrate British imperial interests around the world. 68 paintings, textiles, manuscripts and block prints from the Stein collections were exhibited, including one ‘crumpled up packet in its original state’ of unconserved materials. They were listed in the catalogue (pp. 14–26) under the title, ‘Specimens from a Collection of Ancient Buddhist Pictures and Embroideries Discovered by Dr M. A. Stein at Tun-huang’.[1]

The catalogue produced for the Indian pavilion.
Copy held in the British Library (ORW.1986.a.2170).

Stein was in the list of private lenders to the exhibition but the material was described in the catalogue as ‘Lent by the Secretary of State for India with the concurrence of the Trustees of the British Museum.'(p. 14) In his introduction, Stein, after placing the material in context, discussed its treatment prior to exhibit:

The opening up and cleaning of the crumpled up silk paintings is a task requiring great care and the application of a special chemical treatment. It has been proceeding in the Department of Prints and Drawings under the kind supervision of Sir Sidney Colvin [the Keeper], for over a year past, and about two-thirds of the total numbers, which is likely to rise to three hundred, have so far been dealt with. The smaller paintings are strengthened by the backing of open gauze, while the large compositions are provisionally mounted on Japanese paper until time becomes available for their final treatment. (Catalogue: 16)

However, pasted as a footnote on the same page is a slip of printed paper reading:

With the concurrence of Dr Stein, the exhibits in the wall cases have been remounted by Mr Littlejohn, of the Department of Prints and Drawings in the British Museum, since their arrival at Sydenham.

The monthly reports of the Prints and Drawings Department, the British Museum, give more of the story. They show that the conservation of the material prior to exhibit had been paid for by the India Office who, during 1910, engaged Mr W. J. Goodchild ‘a repairer’. He was supervised by Stanley Littlejohn (1876–1916), the ‘repairer and restorer’ in the Department of Prints and Drawing (P&D) [Annual report of P&D of the British Museum to the Trustees, dated 20/1/11]. Stein notes in July 1910 that 70-80 banners had been flattened.[The Bodleain, MS Stein 7/ff.81-2. Aurel Stein to Percy Allen].

However, as another report makes clear, within a few months several paintings had to be removed from exhibit ‘having been mounted … in a manner inadequate to secure their due protection from dampness in the walls of the gallery.’ [Monthly Report by the Keeper to the trustees 4/7/1911: Sidney Colvin was Keeper at this time but part of the original report has been erased and these comments written in a different hand. Probably the report was written in his absence (possibly summer vacation?) by his deputy, and then corrected on Colvin’s return.] Conservation was taken over by the dept. itself, carried out in the Crystal Palace exhibition building ‘in such manner as to ensure their proper protection & preservation’ [report dated 3/8/1911]. The work was completed and the paintings rehung in the same month, as the next monthly report, dated 2/9/1911 and written by Laurence Binyon, confirms. However, the annual report of the dept. for 1911 (dated 25/1/1912) states that Mr Littlejohn had to ‘devote his entire time for more than two months to the arduous work of mounting and framing in a secure & finished way a selection of Dr. Stein’s silk paintings for a show at the Festival.’

Despite the seeming blame put on Mr Goodchild for the inadequate mounting, a letter of 10 October of the same year concerning a vacant post for a conservator/repairs at the Museum states:

The Keeper recommends that W. J. Goodchild be chosen for this service …. employed for the last two years in flattening and mounting the silk paintings discovered by A Stein — a task calling for exceptional care and skill. During that time the keeper has had him constantly under observation, and is convinced of his fitness to take Clay’s place in the workshop.

Having been returned to their cases, the paintings remained on display until October and were then taken down and returned to the Museum. [P&D dept. Monthly Report, 6/11/11].

Below is a selection of the material on display with the contemporary catalogue entries. A full list, with Stein’s complete introduction, will follow in a later blog post. 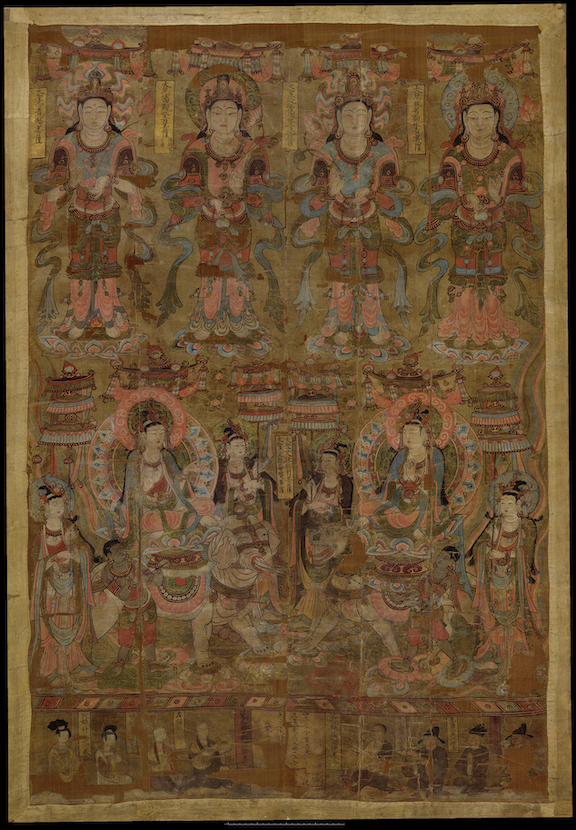 17.—DIVINE PROCESSION. Rectangular silk painting, complete in border, with Chinese inscriptions, dated A.D. 864. Lower portion shows the Bodhisattva Smantabhadra (the God of Happiness) on elephant and Manjusri (the God of Wisdom) on lion, advancing with attendants, who carry parasols. Animals led by black attendants. Along bottom are represented donor, [sic] etc. in religious guise. Above are four forms of Kouanyin (the Chinese Avalokitesvara) carrying the pink lotus and flask.

50.—PAINTED PAPER ROLL. Paper roll, representing in sections scenes of punishments in Hell. Sinners wearing “cangue” are being brought before the heavenly edge. Two figures in attendance on him, one (male) carrying roll of sacred texts, one (female), a statuette, emblematic of the mean of salvation—sacred study and worship.

54.—MANUSCRIPT WRAPPER. Roughly made of silk fragments stiffened with paper, lined with silk, and with coarse woollen tapes for tying. Outer edges and triangular flap make of fragments of rich silk brocade of Sassanian design. On pink ground large elliptical cartouches, bordered with double row of overlapping petals, contain two winged bulls with abundant manes, facing each other on salmon-covered field. Elliptical lotuses fill spaces between large cartouches. Two roughly cut strips of extremely fine silk tapestry are attached to centre panel. Style of weaving is identical with that of the Copts of the third century A.D., and of the ancient Peruvians, and closely resembles that of the Gobelin factory.

This is most probably the sutra wrapper, MAS.858., now in the British Museum. However, many of the sutra wrappers found at Dunhuang were taken apart in the 20th century in order to reveal the manuscript pieces used for lining. Only a few survived in their original form. In the same exhibition, Stein displays another sutra wrapper (cat. 60) and an object he describes as “Embroidered Matting” (cat. 64). The latter could also be a sutra wrapper as some were made from bamboo slips, including LOAN:STEIN.100 from the Stein collection held in the V&A.

Copy of the Prajnaparamitahydrayasutra now in the National Museum, New Delhi. [NB: the four pages have been listed separately online: search for “Ch.xviii.002” to show them all.]

65, 66, 67.—BLOCK PRINTS. 65 is an impression from a woodcut representing Bodhisattva Avalokitesvara. 66 explains the production of coloured illustrated. On right is an uncoloured impression from the block, shown to left with colours added by hand. 67 represents Manjusri with attendants.

Many such printed prayer sheets were found at Dunhuang and it is unclear which of them were displayed, certainly in the cases of 65 and 67. Prints of Avalokitesvara, for example, are now in the National Museum, New Delhi, the British Museum and the British Library (pictured above) (Or.8210/P.20).

The next post in this series will discuss the 1914 exhibition of Stein material held in the newly opened north wing of the British Museum.

1 Response to Early Exhibitions of the Collections of Aurel Stein: Part 2: 1911: The Festival of Empire